Both the pyramid shape of The Reek, Croagh Patrick, and the dome shape of
Nephin could be seen, though not clearly in that pic. Also looking over past
Ben Bulben, Slieve League and parts of SW Donegal were coming into view too,
but perhaps not clear on this pic.

I thought this would be a regular Cairn G and Cairn K visit,
but turned out to be a lot more adventure during this visit.

Cairn G, is very familiar to many people due to it's lightbox. 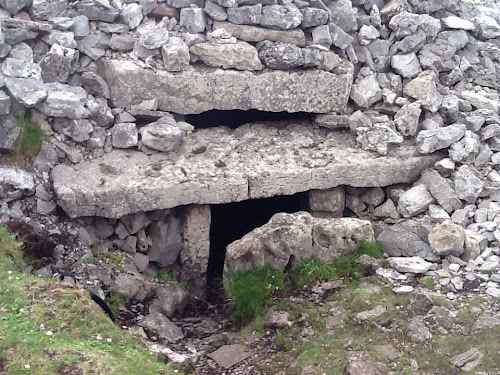 Sad to see a recent epidemic of graffiti here. 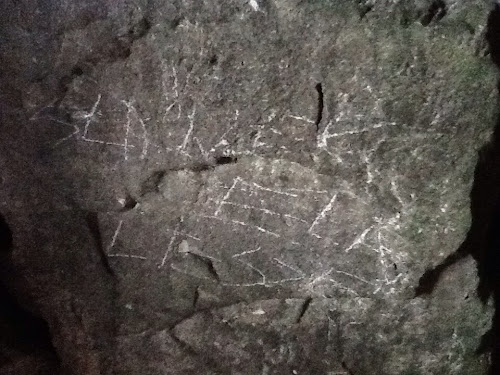 and it is now like this on many of the stones in this cairn.

Treasa, who was with me, was not highly impressed with this cairn, compared to where she has visited before, and was looking forward to visiting more to find the gems here..

Several people visiting Cairn G actually find this to be a bit of a cozy place.
Me? Well I'm interested in here due to its amazing age, and mystery of purpose,
but really not much more.

I always like to take this pic from the back looking out through this split stone though. 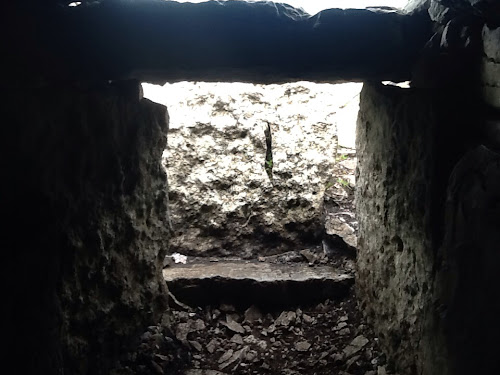 Next, we headed up to Cairn K near the top of this hill here, passing and briefly stopping at the remains of cairns, H,I,J on the way.

No outside pics of this cairn, as I have taken several during many visits here.

Within Cairn K, we met drum workshop and drum healer Aaron of Slapping Skins in Wales. We had met him at Céis Coarran the day before. He joined us with our adventures for the rest of the afternoon.

Four interesting features within Cairn K are the fine example of corbelling construction that is just not seen anywhere else in Ireland. Even Newgrange does not match this. There are four light boxes here, though all of them were blocked in a long time ago.

There is this mysterious triangle stone aligned with The Reek, below one of the closed in light boxes. 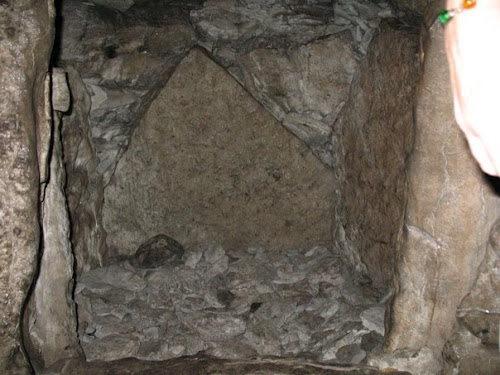 and the passage out has a mystery to it also. 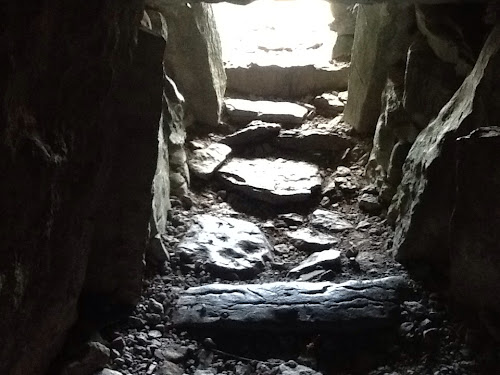 When Aaron came out 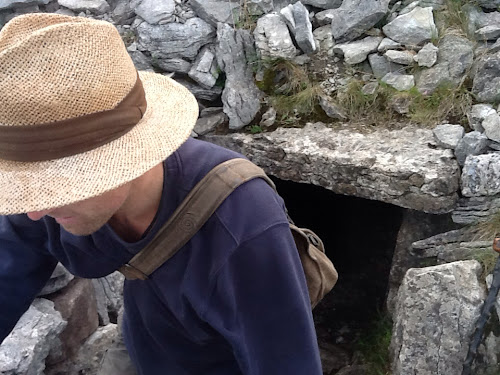 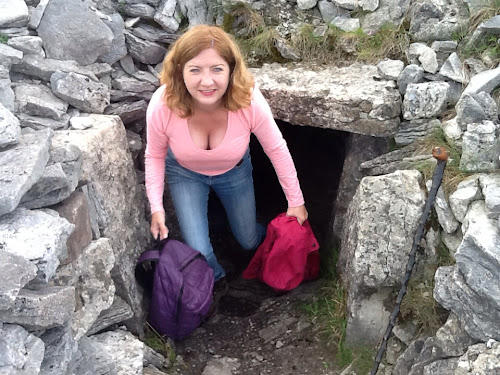 I thought that was the end of our Carrowkeel adventure.

Next stop was to descend into Pollnagollum, a large pigeon hole cave that I have not visited for about 10 years. 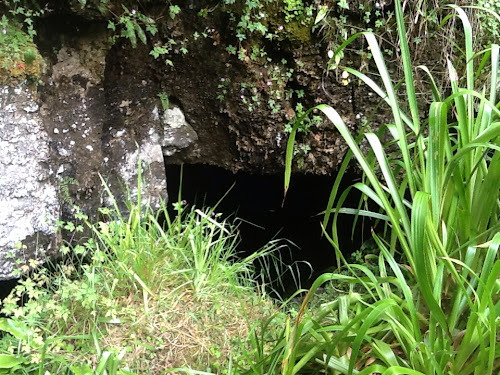 There is a very steep track down to this cave,
and stepping into the cave is even steeper.

Goll, part of the word, Pollnagollum, fascinates me as it seems to come from an ancient Ireland term relating to a hole where the light disappears into darkness. Various myth figures called Goll, seem to be people who had lost an eye.

Anyway, back to our adventure, I chickened out going completely into this cave due to fear of breaking my iPad that I was carrying to record stuff, and not trusting leaving stuff, plus I had a muscle problem with a leg.

Here is a pic from inside this Pollnagollum cavetaken by Treasa that includes Aaron. 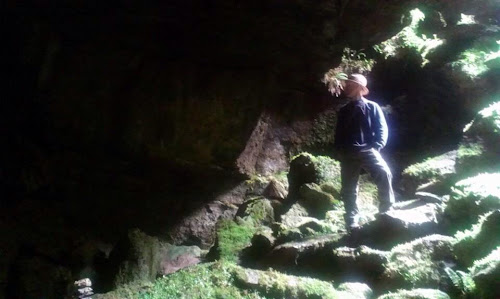 Getting out of that place is certainly trickier than getting into it. This is not a place I would take a group. Venture there at your own risk folks :-)

From there we trekked over to see the ancient village remains, but a light drizzle made visibility of that blurry. On the way there did take picks of the Rocking Stone, but that does not rock any more as all of the 'rockers' have eventually crushed the pebble that held up this big stone. 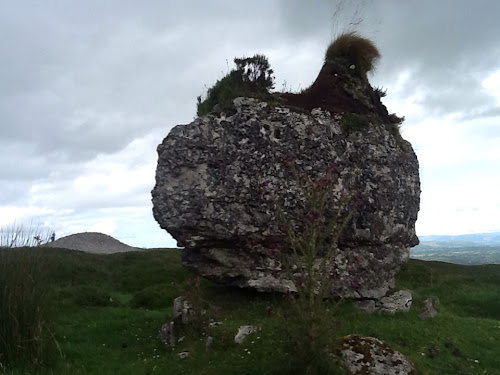 Heather was just about making an appearance here. 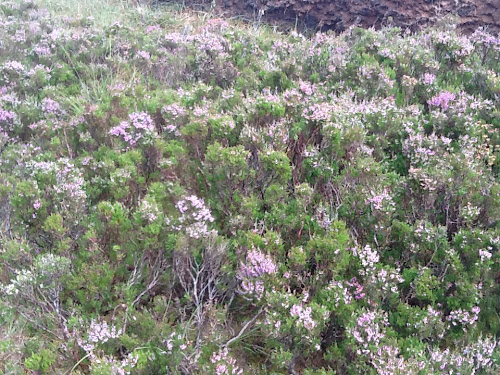 Down from these cairns I explained why cairns L, M, C and D were not really good ideas to visit, but these two enthusiasts, with me, were game to go up to Cairn E. This is a strange cairn technically called. 'Trapezoidal Cairn' that seems to be a combo of passage cairn and court cairn in one.

This passage area is open, as the cairn was gone long ago. 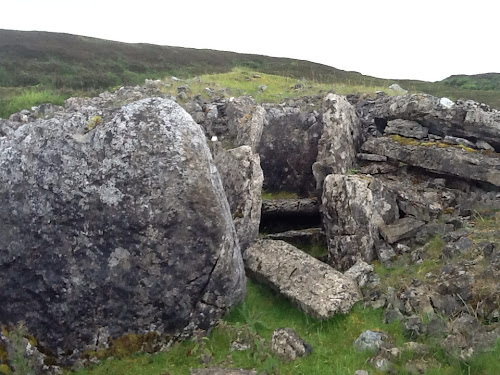 The one thing certain for us. On arrival here was swarms of attacking midges.
Aaron was having a problem with them here, for one. 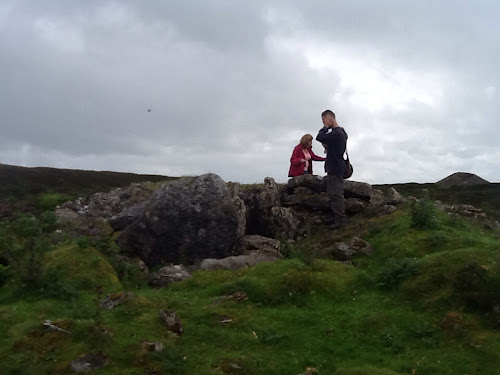 I dashed to the back of this odd ciarn to get some pics of the court end. 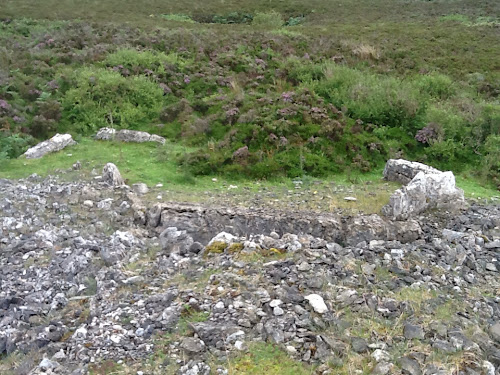 There was no enthusiasm to carry on to Cairn F, in the short distance from here. 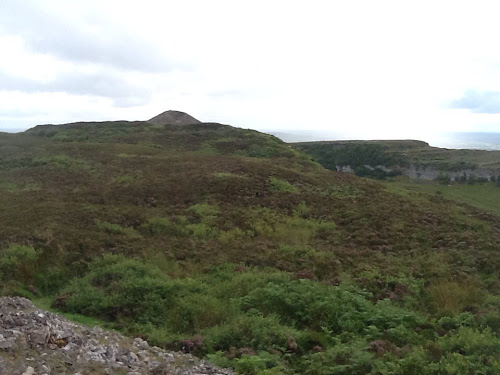 A drive down to the lower car park and Aaron invited us in his camper for tea etc. 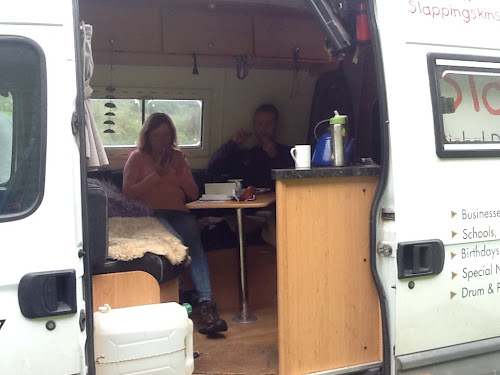 After this sojourn, the enthusiastic duo wanted to have a go at getting to Cairn B,
seen in this pic here. 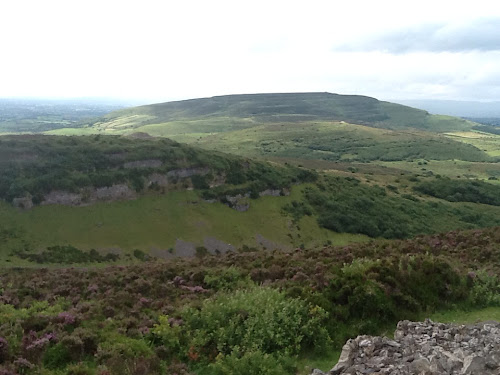 This is the toughest cairn to get to, no matter how you try it. The townland it is on is known as Treanscrabbagh, translating as something like 'rough third'.

I really did not feel like ascending the ways I had done before. It seemed like approaching from the South would be easier than climbing the steep North face. Alas, that South route is full of deep undergrowth and unexpected swallow holes that indeed swallow you up. A dangerous route, don't try it,

However, it has an incredible abundance of bilberries and wild raspberries :-) 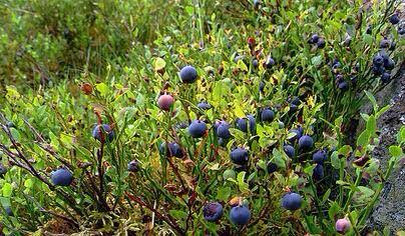 Inside, this cairn has a passage but no side or end chambers.

Entrance for going in ... 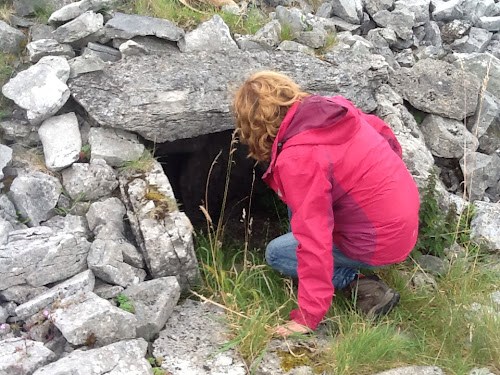 and what we see looking out now ... 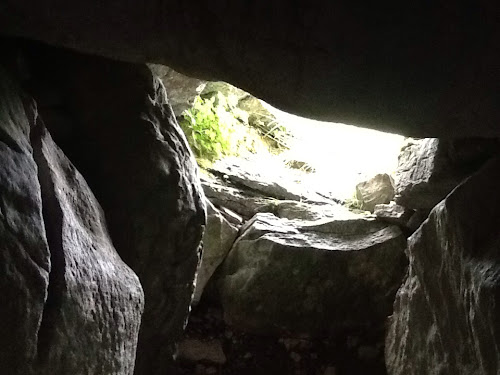 Bright sun going away, we were hungry, time to go downwards and end our adventure.

One last view into the more cloudy horizon, and the Nephin dome mountain still there. 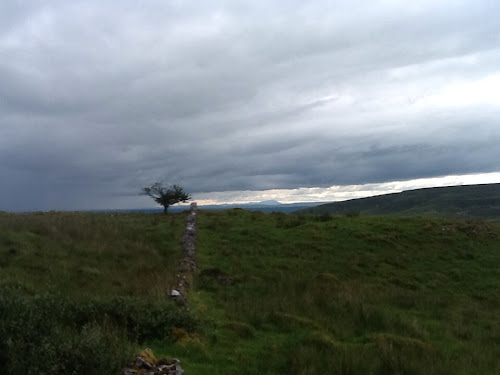 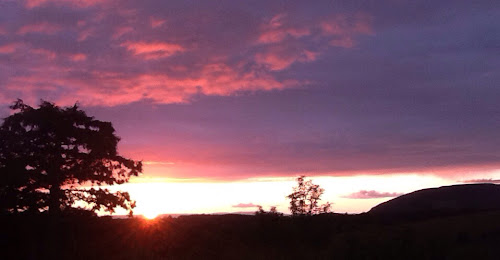 Thank you for sharing a fun adventure afternoon, Treasa 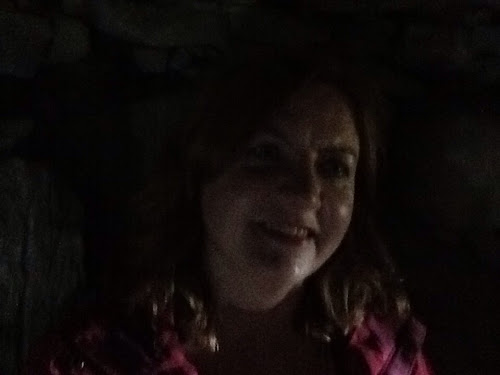 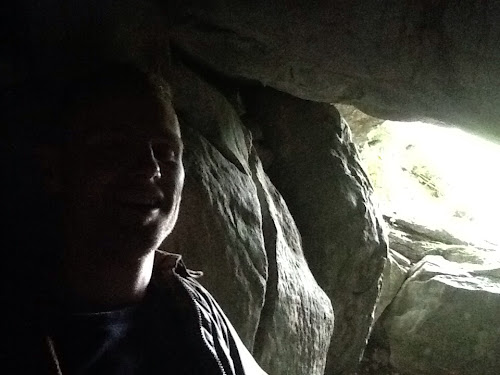