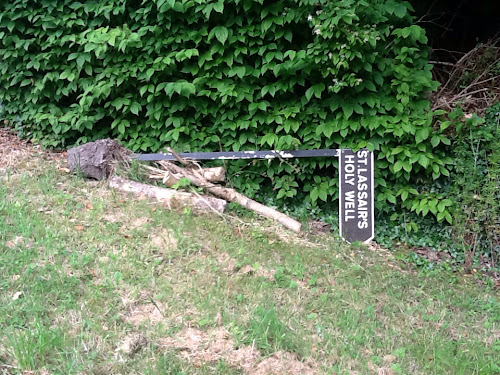 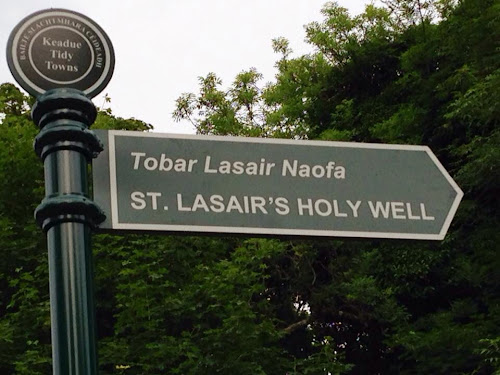 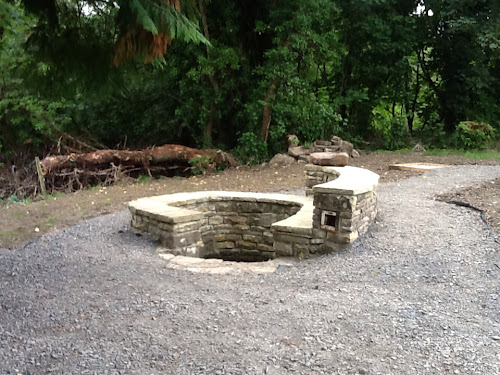 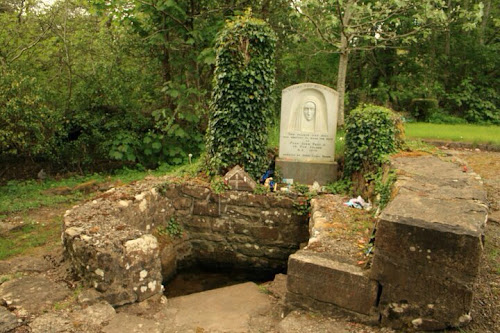 This was one of my favourite Holy Wells in Ireland as it included many features that a traditional to wells but rarely found in one place. Sadly, this well, due to its recent changes, no longer makes this possible.

The change-around of Lassiar's (Lasir's) Well appears to be part of a local initiative to upgrade Keadue Village and nearby 'attractions' to help it win the national Tidy Towns award again. Regarding this well, I think they have gone too far.

I will go through the components and where they are now.

Most important, perhaps, is the Ballaun Stone, which used to be positioned like this ... 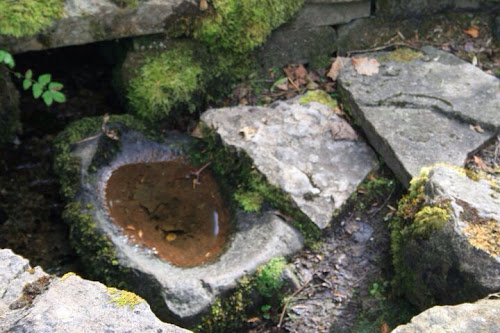 The well water used to overflow out of the well, around the bottom of the bowl, and out under a bridge, that you see part of top left of this pic.

That bridge is cut in a way that is distinctly stone cut with stone tools, and seemingly a broken capstone from one of the nearby 4000 to 5000 year old cairns, and put to new use. Here is a better pic of that ... 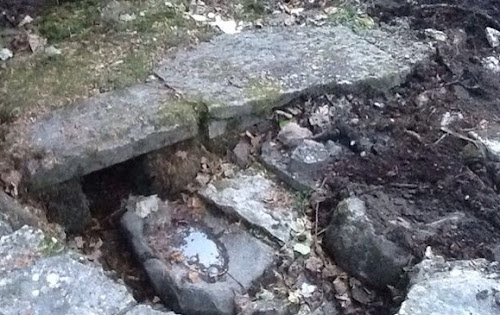 This is all covered in now as you can see from this pic ...

Doing this has also shut off is the stream from Lough Meelagh that the Priest would have taken to the Mass Rock, that I will show you shortly. Priests always approached these mass rocks by water during Penal Times so that their footprints could not be followed.

Do the people handling this well 'improvement (?)' know anything about what they are handling? As for the Ballaun Stone, this is sad.

Last time I was there it was sitting on the new stone wall of the well ready to be positioned elsewhere. 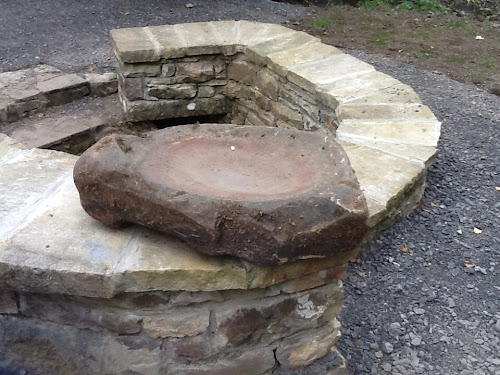 It looks like a space is being made for it, that looks ridiculous already, away from the water stream. I just hope they do not make it worse by putting it on a pedestal like a similar ballaun stone has been perched at Roundwood, Co. Wicklow.

So what about the stone that goes into the Ballaun Stone?

Well that was put onto the Mass Rock, as a Cursing Stone, a long time ago. 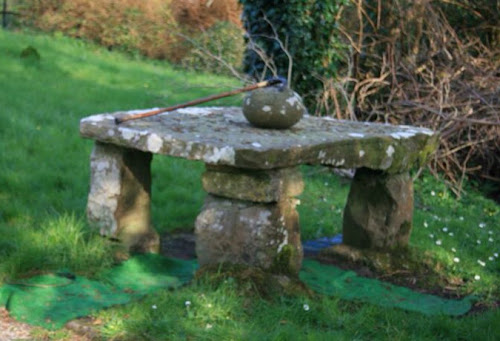 The carpet pieces still underneath this Mass Rock are for people to lay on who seek to be healed to be able to see clearer, mentally and spiritually. Some folks do this for backache and arthritis too. 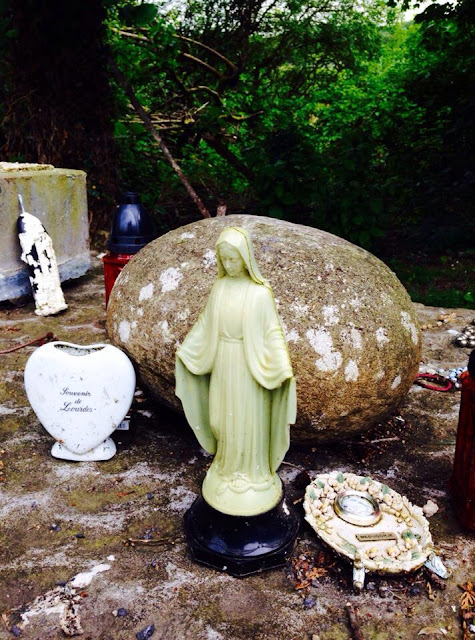 Surrounded by items left around the well but moved onto the Mass Rock table. If you look at a pic above you will see some of this items close to the white plaque once by the well.

Also note that the table of this Mass Rock is carved by stone tools on a stone, so this is probably part of the same ancient capstone as the covered over bridge.

As for the White Plaque celebrating the visit to Ireland by Pope John Paul, that has its own display area now ... 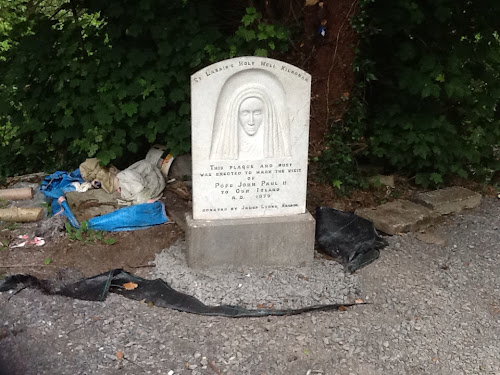 To put it all in perspective, maybe this pic will help ... 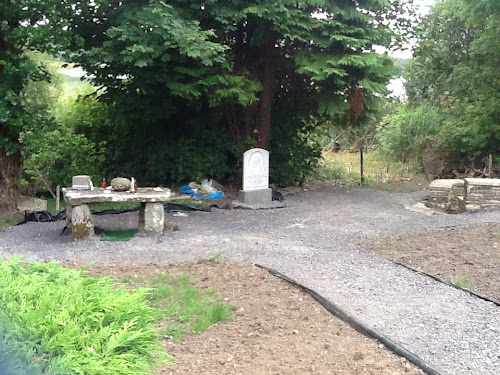 What I do miss are the beautiful stone steps behind the well, now gone .. 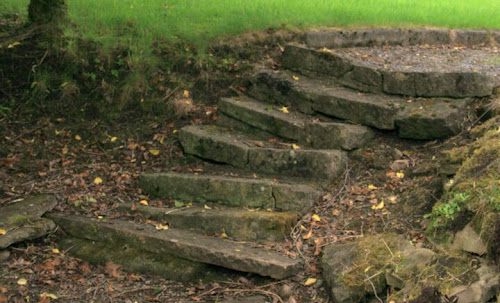 I suppose 'Health And Safety' and 'Wheelchair Access' issues caused these to go, though the current replacement path would cause wheelchairs to stick. 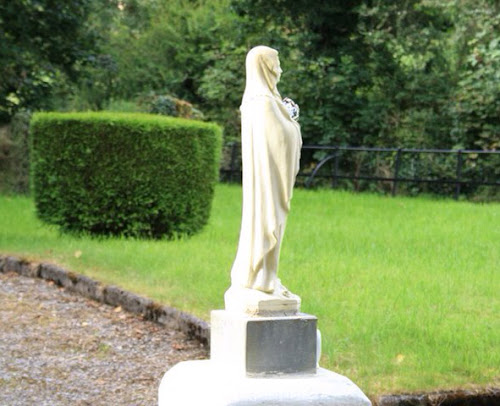 The White Tower with the Hail Marys and Our Fathers instructions has also gone ... 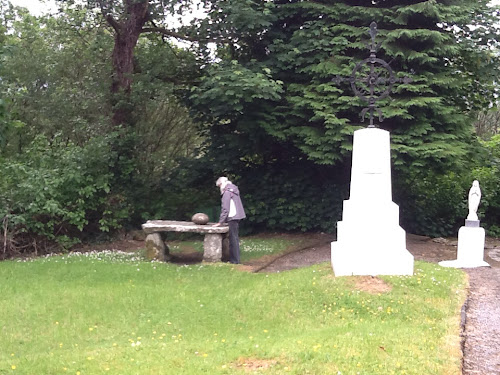 The 8 pointed star circle on this white tower has now been transferred to a new sculpture ... 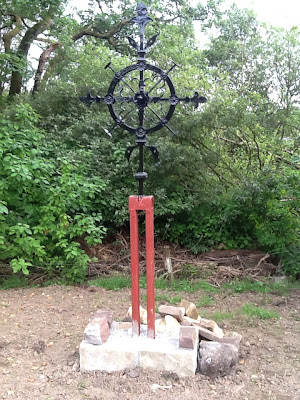 What on earth is that all about?

Rag trees are gone, though no specific tree was really used for some time.

The original Rag Tree was an Ash by the well, which was cut down about 15 years ago, I believe. Now the remains of that Ash has been uprooted and left there, as has the triangular stone with a cross that used to be in front of it. Here's where they are currently dumped, tree on the top left and cross stone towards top right, though quite small ...

Lets move on elsewhere around the Keadue area.

Across from the Well is the remains of the Kilronan Abbey, cemetery
and O'Carolan's Grave.

Not much has changed here except access seems to be trickier and the cemetery is not as well kept. A lot has overgrown.

The original sign to Turlough O'Carolan's Grave is still present 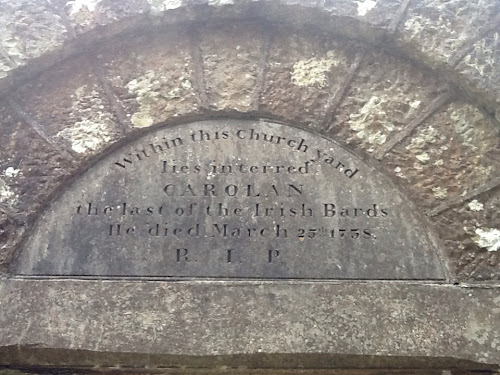 but this new sign set seems to give the impression that we have to jump over the wall to get to see anything. 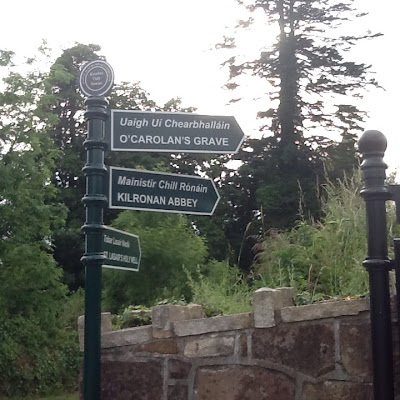 For those of you who are not familiar with Turlough O'Carolan's grave, here it is. 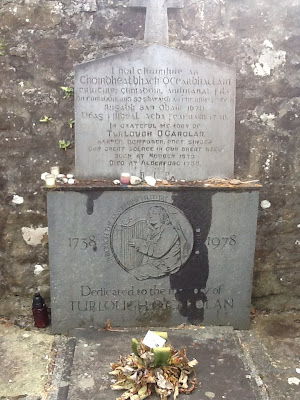 This is within an enclosure the local Dermot-Rowe family,
who were patrons of O'Carolan and who themselves have
a deep ancient ancestral history of being Bards to Gaelic chieftains.

Out of the cemetery and a few metres west is the Gate House, or what we call the Fairy House 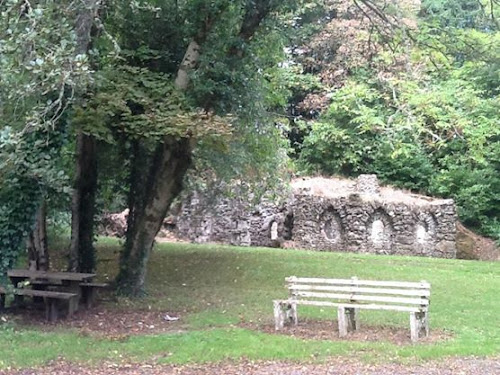 Nothing changed here other than getting its new Gate House sign. 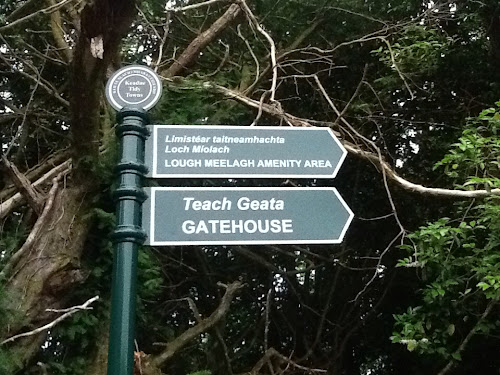 Going east to the eastern end of Lough Meelagh we have Knockranny Forest which is popular for its signposted walks and ancient court cairn.

A lot of new signage has been put up here around the car park and through the woods. I hope the vandals keep away. 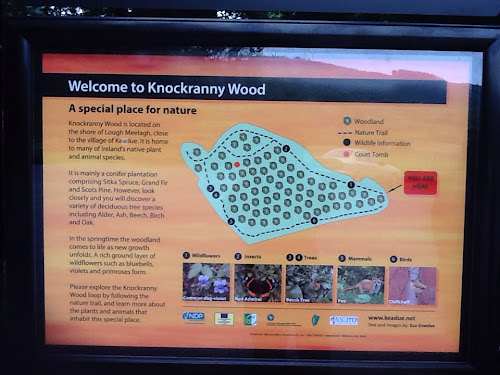 Here's Erika having some fun and transformation within the Court Cairn
within these woods. 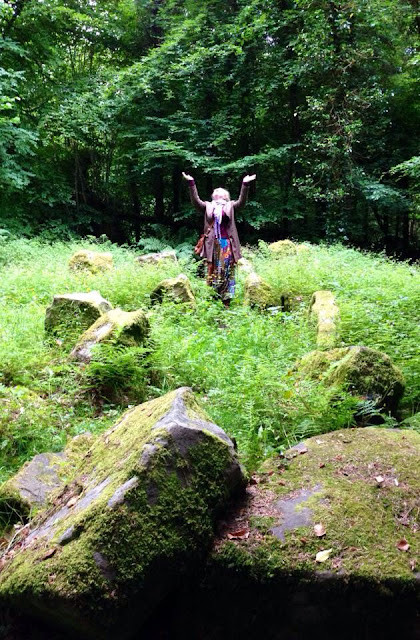 Here's a peek at what here is like before it was overgrown ... 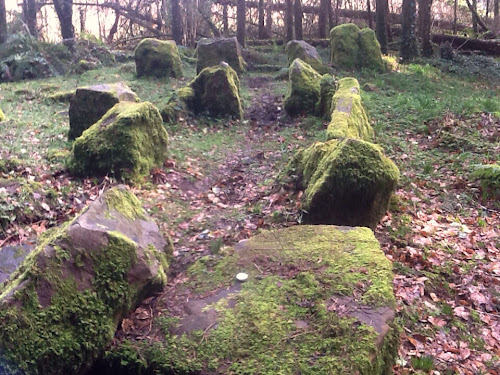 Picnic table area outside of the woods has been taken away
and replaced with a Bog Oak sculpture. 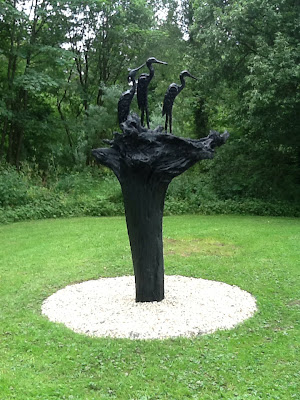 which is very nice, but wish picnic tables were still around this.

The picnic tables in the woods have been re-furbished 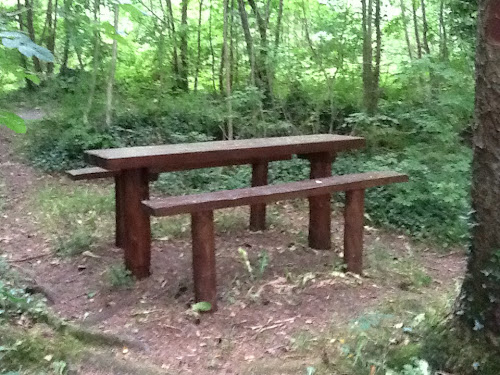 but from experience this is a mighty midge biting area, hence why the tables outside of the wood are prefered, looking over the lough, as those are usually midges free.

We do have a Bards In The Woods here first Saturday in August, 2nd August 2014, and we would like to make it a fringe to the O'Carolan Harp Festival going on the same weekend ... that has NO public harp concerts !!! - just Rebel Songs bands. 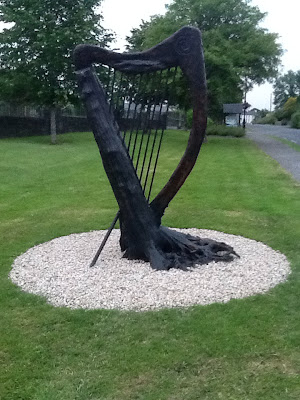 So not only bring your favourite words, stories and poems along
but also bring your harp or harper, if you have any.

The Picnic WILL be with sight of this Crannog in the Lough here ... 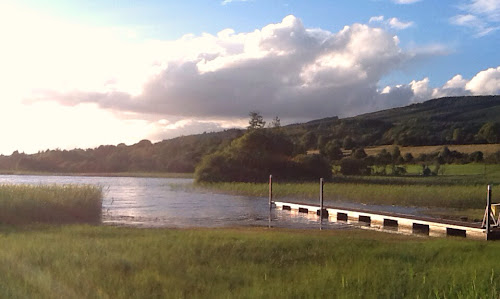 It is here that a Linnet on this Crannog island is said to have
reviewed and responded to Turlough O'Carolan's new compositions.
I will tell you the story when you meet with us there :-)

Again, click here for the O'Carolan Bards In The Woods Event info here