Is This Lughnasadh, Lammas, or Cor Sióga? 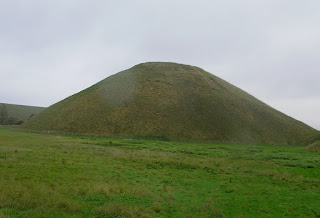 In Ireland when we speak more of Lughnasadh. We tend to share the symbolism of the tale of Tailtiu and how Lugh  dedicated this time to honour the death of his foster mother through feasting and warrior games, especially during this Olympics Games year.

We also tend to talk of the first harvest, often with a bit of confusion.
How do we celebrate this?

For me, this is the time of "the hill", and I will explain more later. 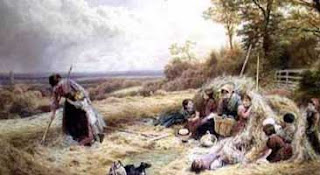 Some folks call Lughnasadh a "fire festival", just as they do for Imbolc, Bealtaine, and Samhain, but that's not what I see it as.

Personally, I regard these are water festivals, times when the sacred wells are very important. I tend to feel these cross quarter times are sacred waters calling on fires while the solstices and equinoxes are fires calling on water, but this is largely
"making it up as we go along" stuff. 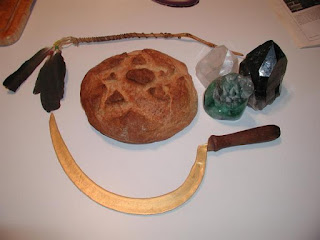 Fire is important at this time, though, for the baking of this first harvest, especially of bread from the grains, and this leads us into the other word of this time, Lammas.

The word Lammas is probably much more modern in origin than Lughnasadh as it comes from the Anglo Saxon word "hlaef mass", meaning 'loaf-mass'. A thanksgiving for bread made from the first harvest of grains was a very popular earliest Christian practice through what is now the UK and Ireland.

During this loaf mass, this Lammas, the bread made with the first harvest grain is placed on the altar, blessed, broken, and then shared with the people present, I assume to represent the body of Christ. 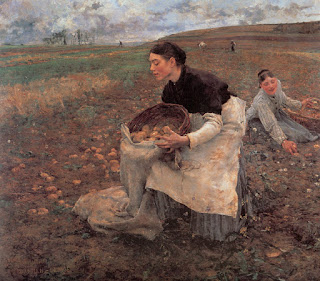 When grain was seized from Irish people as rent payment and replaced with potatoes, the first potatoes became the first harvest and may well be where the origins of boxty baking came from as a bread substitute.

I find I am in this groove myself as I do not grow grains, and nor does anyone around me, but I do grow potatoes. Already, I have pulled first harvest of them, walked over cut rushes across the kitchen, boiled the new potatoes and shared them. Left-overs have been mashed, then added to more grated potato, a bit of potato flour from last year's crop to bind them, and I made boxty ... and shared that too.

Putting the stories and traditions of Lughnasadh and Lammas aside for me
this is the time of the Hill, the Mound.

For this I use the word of a hill that our big tree labyrinth here is aligned to,
"Sheecor", which I prefer to call "cor sióga (coor sheega)".
It's sterile translation is the "reality of faeries", or where the fairies are,
or what local folks say is "the ascending path to the fairies".

So for me this time is not Lughnasadh or Lammas ... but Cor Sióga. 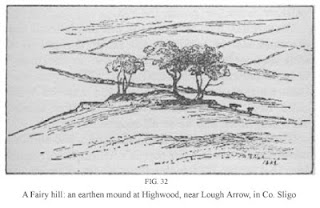 Assemblies on hilltops seem to have always been a tradition at this time
we call Lunasa or Lammas ... and I call Cor Sióga

The short story of this is that seeds are said to be germinated by some spirit within the mound, the Sióga, the Sidhe, the Fae, and then some of first harvest taken to the tops of the mounds to be fed to the birds there, a visible transformation of the spirit.

The first harvest, first bread, first potatoes, or first boxty, is donated, sacrificed, gifted, as a thank you and request for more blessing.

Some say that the ancient megalithic cairns were originally built for this purpose, as seed germinators, and then used as human burial tombs at a later date.

Eventually, it seems that the druids cashed in on this tradition in some way and replaced the birds as receivers of the first harvest donations. Then as these latter druids became monastic priests and currency became coins, this was one of their most important collection points of the year. 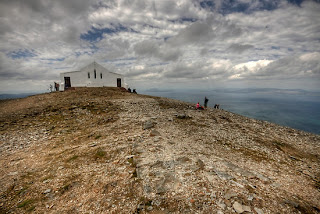 It is said that latter druids and earliest monastic priests introduced the idea of climbing these sacred Lunasa/Lammas/Cor Sióga hills and mountains as being a penance to draw out and be cleansed of sins. This was the origin of pilgrimage generally, I think. Eventually this was made simpler by inviting people into churches instead, put some coins in the collection and such payments would cleanse sins.

Once all these sins were cleared, the people could then start all over again filling themselves with more new sins from drinking, dancing, and all kinds of "unruly" behavior after their penance pilgrimage climb. 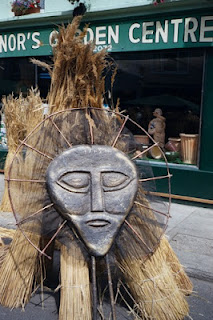 Some of these festival and fairs are called 'wake fairs' where a mock solemn wake is held on the eve of the fair followed by extreme jolly antics during the day or days of the fair. Some folks make this wake the "wake for the Corn God", corn being a collective name for the grains wheat, barley, and oats in Ireland and UK.
It is the Corn God that dies during the cutting of the first grains.

In general, this is a mourning for the death of summer. Though warm weather continues through August, into September and some more days in October,
but this is the time when the nights are seen to get longer again. 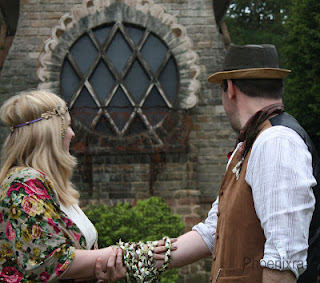 The "antics" of the fairs was also once a time for seeking out and taking a sexual partner for the fair's duration. Some fairs and festivals do or did last a week or two, though three days was more the tradition. Some of the Bealtaine traditions came in at this time such as mock handfastings and sharing hole stones on top of mounds.
Of course some pregnancies also came from these michievous antics followed by Bealtaine births.

The origin of holiday romances perhaps? 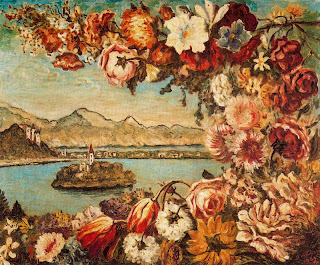 Summer flowers are abundant at this time, daisies, poppies, cornflowers and more, and this is the end of their time too so there would be all kinds of competitions to see who could be the most creative with flowers. This is why some of the fairs of this time, held on Sundays only now, are known as Garland Sunday. At these fairs, the emphasis is not on first harvest of food but the competition of vanity.

Even today, the leading events at Garland Sundays are dog shows and baby shows, both with rosette prizes, vehicle floats covered in flowers and all other kinds of art with flowers. 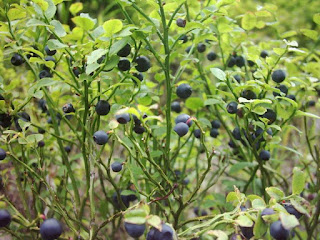 Back to the hills and this is also Bilberry or Blaeberry picking time, and the best bilberries are up heather hills. The higher you go the bigger and more abundant the bilberries are. Bilberries, the fruits of the Fae. Also the fruits of mating together boys and girls for sexual frolics as they dissapear with their hoards into hillside caves or back into hiding places in the woodland glens below.

Sometimes I tend to wonder if the story of the games inspired by Lugh are a macho and hero retelling of the playful competitiveness of floral decorating and bilberry gathering? Is Balor the Corn God that Lugh of the coming Autumn/Fall slays by putting out Balor's bright burning eye, and then leads with his own il-Lugh-mination through the coming winter? 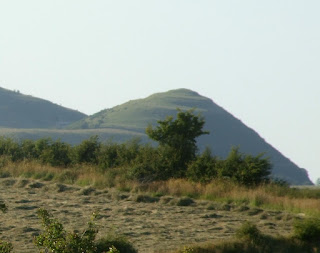 So for me, this is the time of Cor Sióga
... not of warrior battles and not of penance to ward off sins

I ascend from my seeds of darkness leaving winter
to the thanks for my harvest at the summit.

As I ascend, and my crops ascend,
the Fae ascend with me and my crops together
and I am reminded again who the Fae really are.

As for the frolics after all this
I'll leave that to your imagination ...